It is fair to say that business is a constant in that change, progression and reinvention are the motions of typical businesses in all but a few niche industries. As we look back through history this has been a theme that rises above all bar delivering value. Trends come and go and follow the traditional adoption curves we all love to admire. As the pace of change, progression and reinvention accelerates one needs to remain relevant to the customers they serve. A key trend in our always connected and on demand world is how organisations incorporate digital into their products, services and ultimately experiences.

In this multi part series I will attempt to provide clear and meaningful insights into rethinking with a digital mindset into a day one business.

Digital is the confluence of your customers, technology and business and is driving an exponential number of trends. 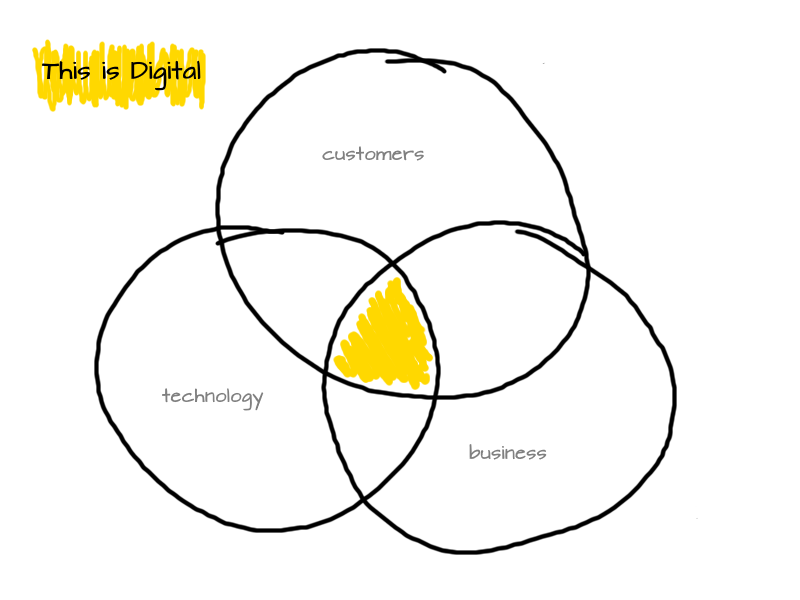 The foundation of digital trends have their roots in technology and ultimately software. Let’s think about this for a moment; the year is 1990, would you have agreed with talk of artificial intelligence making predictions more accurate than a human, having conversations with a machine which is subtly indistinguishable from a human and data being transferred from anywhere on any device wirelessly at speeds simply unimaginable. Today, you can watch just about any movie you like, listen to any song you desire all while having your meal delivered from your favorite restaurant and all from your palm – your account is charged and there is waiting and no checkout required.

The digital business inflection point is an understanding and strategy for delivering the digital promise. By thinking, creating and using technology we can transition business to a digital realm that resembles the familiar bricks 'n mortar staple that is a legacy from the previous revolution - but in a way that brings unrestricted scale and the possibility of zero marginal cost while delivering a superior customer experience.

Around 2010 the phrase “Every company will be a software company” became popular culture, looking back that was a bold statement, however the phase has now evolved to be known as “Every company is a technology company”. In the half dozen or so years between the statements one thing is clear; technology is driving change at a rapid pace into every single corner of our daily lives and what the statement reminds us is that change is constant and iterative.

Underpinning technology is software, and software is evolving faster than anyone could have imagined. It is clear that platforms now enable agility and are superior to the traditional monolithic systems of the pre-internet world. Platforms typically morph into mini internets or ecosystems which is more representative of the way all the elements interact. Just like we have operating systems for our hard devices we have evolved the internet to have its own operating system.

The operating system of the internet has very quickly become connected services, protocols for interaction and most importantly no longer does the technology choice become pivotal to success as, like an ecosystem, the internet is reliant on mutual participation more so than the nuts and bolts which hold things together.

A modern platform simply contains an eclectic mix of technologies holistically joined through a virtual fabric of service layers. A virtual ecosystem.

Before it was software, today it is technology – the demarcation has blurred and been lost to the evolution of Digital.

The previous revolution gained momentum around the 1800’s. The industrial revolution changed the way we worked, traded and ultimately consumed goods and services. By moving manufacturing away from homes using basic tools by a sole trader to mass production on a systematic process of machines with people funded and motivated by organisations, the world entered an era which lasted several hundred years. The industrial revolution was an engine room for the economies of the world.

Productisation had become fundamental to business as companies looked to use locally sourced materials, labour and services to supply repeatable products and services into a market with low levels of competition due to localisation. Typically products (and services) all went through a similar life cycle of invent, build, sell and then upgrade. Sometimes the life cycle lasted several years and sometimes the lifecycle lasted decades but typically went through a similar cycle. It could also be argued that upgrade was replaced by recreate or reinvent in the latter stages of the industrial revolution. 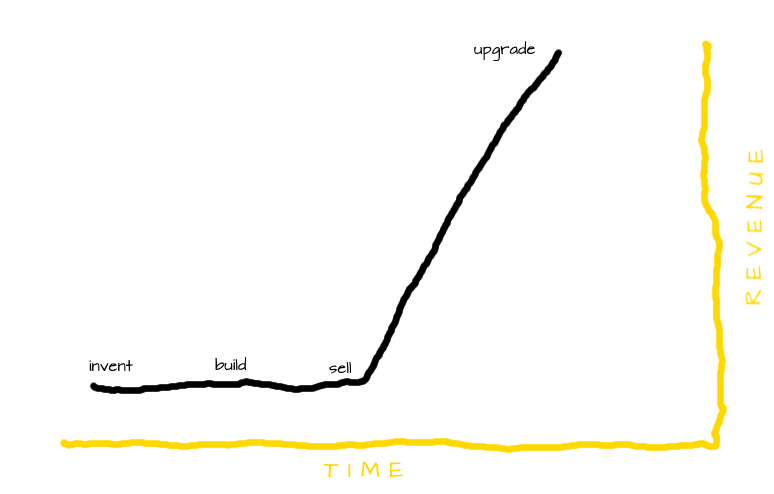 Teams of sales and marketing folk were arranged to take products to other businesses and consumers, to create a demand for the product, all to drive success and prosperity for the company. If there was a problem with the product – the engineers would fix it. If there was a problem with suppliers – procurement would fix it. These silos of people and teams know one thing and they know one thing really well! This structure permitted a well-oiled organisation to set and mostly forget a product.

Around the late 1970’s a bunch of smart, nerdy guys reimagined a little known piece of kit called a computer. What they built was the personal computer with a vision of every home and every business to own a low cost computational device which previously was only accessible to all but the wealthiest banks and fortune companies. This was the inflection point for computing and the beginning of the demise of the industrial revolution as we knew it.

During the initial heydays of the burgeoning technology industry, companies used the same recipes for success as the predecessors. The lifecycle of invent, build, sell and then upgrade is well and truly obvious in the infancy of the tech industry. This recipe made for large profits by creating monolithic systems requiring enormous upfront costs and locked the vendor and their trades in for a lifetime of income by supporting, patching and upgrading. The threat to this recipe was the internet as the internet would not just remove regional barriers but provide utility computing, new products and services as well as redefining scale. The challenge would be evolving the internet to not be dependent on any one particular technology but to be agnostic by relying more on protocols and standards.

At the turn of the century, year 2000, while the world was attempting to understand if the millions of software systems built around the planet would still be operating on the 1/1/2000 a quiet revolution was taking shape. The digital revolution has been gaining momentum for several decades now and is maturing much faster than it’s industrial predecessor.

In a small revolt to the closed in, non-transparent operating systems of the time, certain individuals were obsessed in finding ways for systems to communicate without dependencies on the underlying operating systems, the application programming interface (API) was taking shape and was about to again change computing. This digression from closed-in, monolithic and proprietary quickly pathed the way for open standards, service oriented and technology agnostic tooling to reinvent what essentially data and business logic had become; the reinvention of building software was gaining momentum - fast!

What started as a protocol for computer systems communication has very quickly evolved into the standard for transfer of information and data sharing in the modern era of technology. Usage and metric data could now be captured, sliced and diced in a way that brought new meaning. Pivotal to the modern era of technology is cloud and SaaS services. SaaS is an abbreviation for software as a service and SaaS has changed bespoke, monolithic functions and services which were performed by proprietary computing on your premises into utility scale distributed components easily accessible and consumed by other computing resources. Data and information is transferred in the cloud to endpoints and SaaS services using API’s and these SaaS services and API’s make up the operating system of the internet.

Just like the movement to low cost personal computing considerably lowered the entry costs, SaaS meant that no longer would we need teams of people to build and support our bespoke software, simply by commoditising non core functions to suppliers who are experts in their vertical we could focus efforts on core business functions within the platform - the functions which matter, the points of difference. This has opened up high quality, reliable applications as a pay per use utility. The way we and organisations trade changed forever as we moved from proprietary, bespoke applications to real time connected services creating a virtual application.

An operating system for the internet has fast tracked new business models which only a decade ago would have been passed off as dreams – born in the cloud, mobile first; these are paraphrases for a modern business delivery model which has started typically by one or two people with very little capital in an astonishingly short time frame. Access to high end technology and services has never been as easy or as low cost as what it is today.

Traditional bricks ‘n mortar organisations are leveraging digital to deliver incredible, complex products and services globally at low cost while augmenting their traditional lines of business. Not so long ago buildings were built to deploy businesses, now we see platforms being built replacing bricks ‘n mortar, a virtual building where workers and customers come to do or buy their wares. Often these platforms are scaling to a global footprint and creating or operating within an ecosystem of like-minded organisations which complement each other or provide leverage. These platforms pull and push together services which can be consumed by other services, systems and platforms and ultimately redefining the value chain.

The new business models we see do not contain provisions for silos of teams working in isolation mode. Typically they employ a collaborative framework containing a flat structure and common goals. People are empowered to work within a manifesto and bring multiple skills to the table – everyone is responsible for thinking, creating, delivering and maintaining as well as a pinpoint focus on the customer, some of this is new and some is just different.

Focusing on customer problems is a great starting point for innovation. The best innovations to come out of decades old organisations have started with the customer first. These innovations are not about IT, technology or phones. They are about taking the last several hundred years, shoehorning them into the past 20 and reimagining the future. We know companies have changed procurement habits, we know the needs have not changed but the fulfilment has – shopping no longer implies buying. The new business model has added data, collaboration, and ecosystems as well as reinventing loss leading products and services.

Join me on this series as we continue to break down some of the key tenants to a day one digital business and look at this from the perspective of thinking, creating and technology.